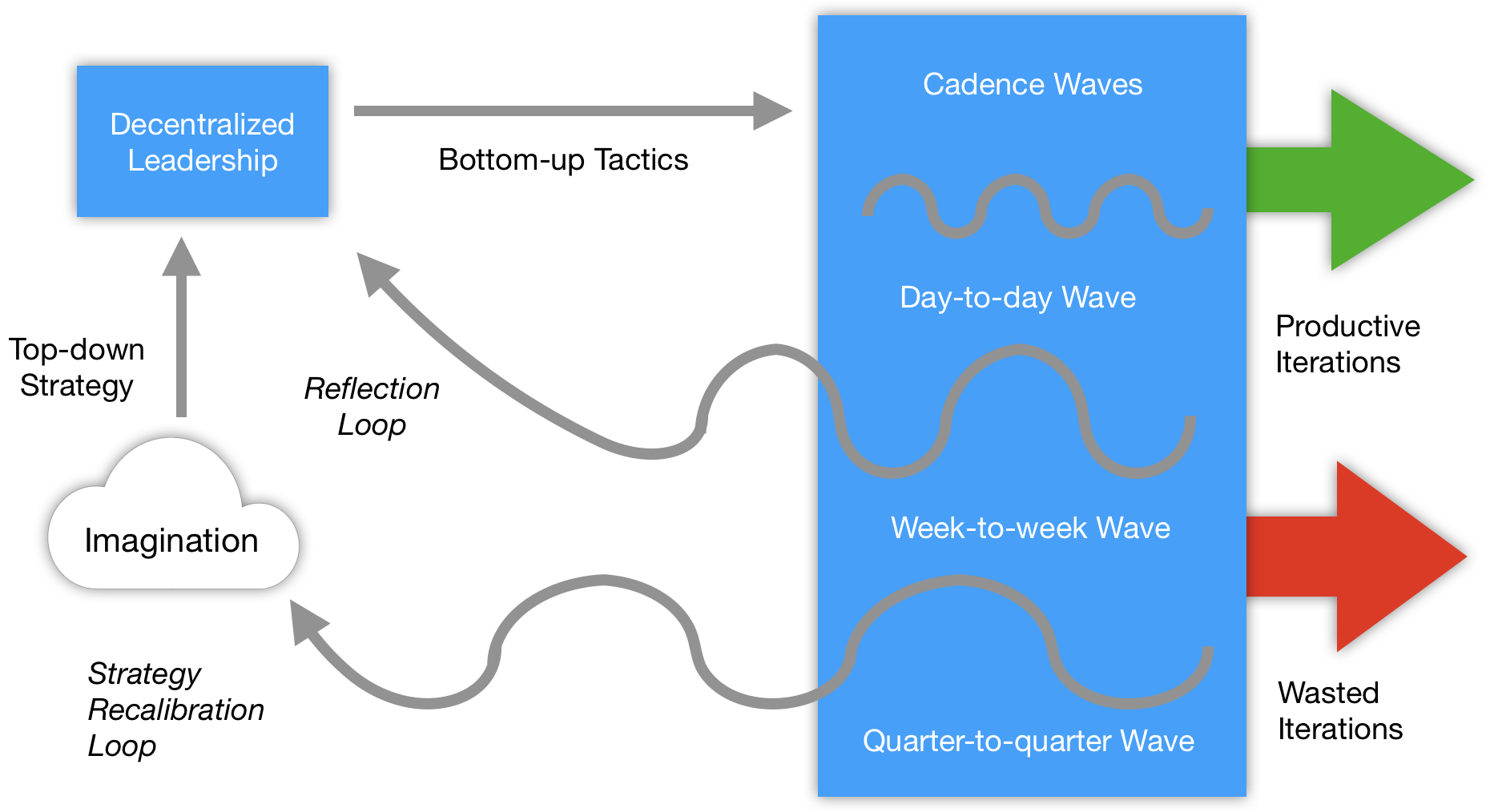 Now that we’ve structured our talent, it’s time design to a System for Executing.

The goals for this system this are:

It’s overplayed to reference a Jon Wooden quote, but I can’t help looking to basketball for inspiration when designing my own Dream Team systems. I love playing and watching the sport.

Reflecting back on our System Design Principles, one principle Ray Dalio includes in the Principles In Action app is:

“Think of your teams the way that sports managers do: No one person possesses everything required to produce success, yet everyone must excel” — Ray Dalio, Principles in Action

Look to a sport you love for our own inspiration.

Strategic objectives need to be downloaded from the realm of imagination. These come from the overarching company vision. There are usually just a handful of these visionary types within an organization.

This top-down strategy is flowed as input into the Decentralized Leadership part (our structured talent).

It’s decentralized in that the actual decisions on what tactics to pursue in service to the top-down strategy are made bottom-up by the people closest to the complexities of relevant problems and with domain context expertise.

These bottom-up tactics then flow into the Cadence Waves part of the system.

A cadence is where actual work gets done. The peak of a cadence wave is flow state.

It’s a misnomer to call it a sprint; calling it a sprint is a sure fire way to burn out the people in your execution system. A cadence should be defined more thoughtfully and sustainably as a cadence wave.

There are multiple cadence waves executing simultaneously with different wavelengths. 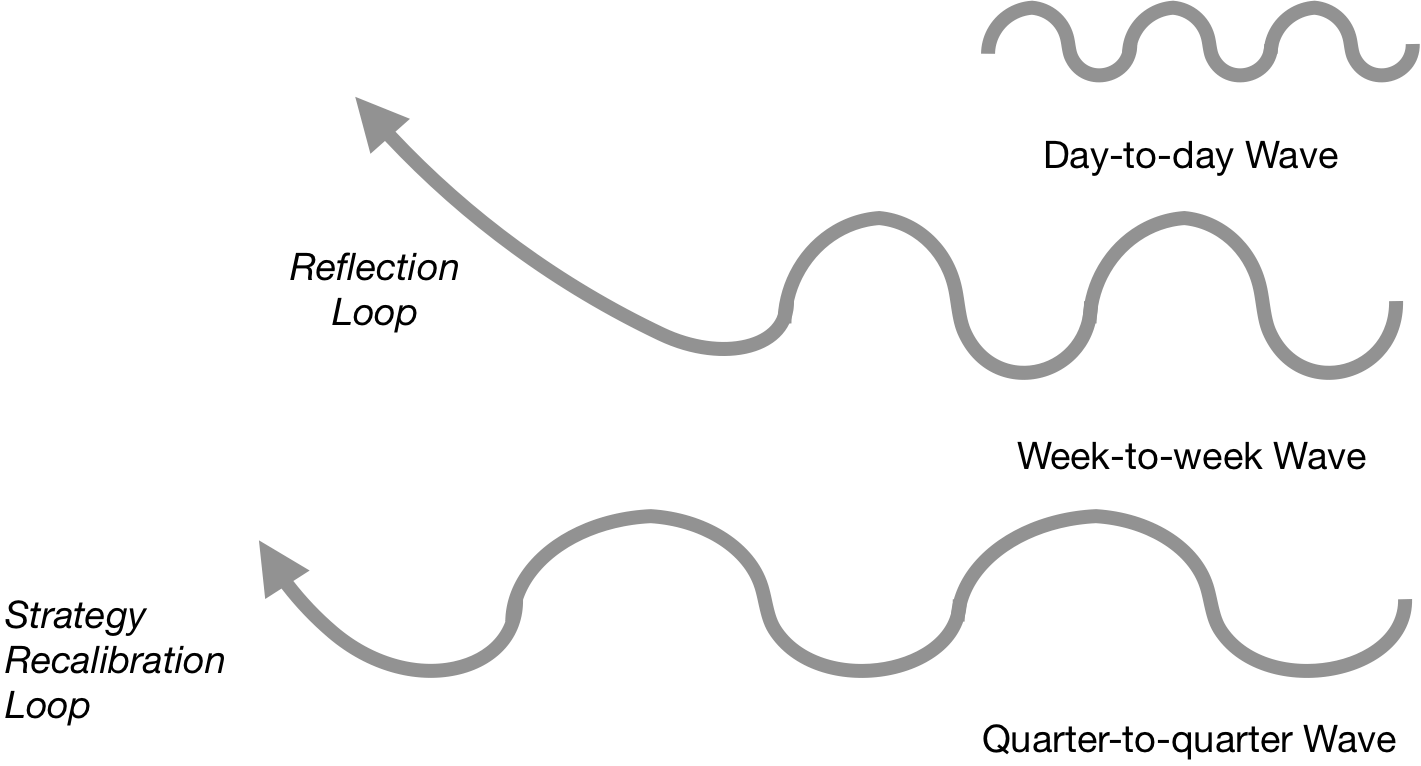 To achieve a particularly bold and ambitious dream, the year-to-year wave (not shown above) is of particular interest as it can take 10 years (i.e. 10 orbits around the sun) to achieve it.

A quick review on waves is in order. A wave is defined mathematically by:

Waves are a fundamental concept to work with as they can be used to describe a wide range of natural phenomena and “unnatural” phenomena like traffic flows. Think of car traffic on the highway as the world’s worst cadence wave.

In this example, we are using a sinusoidal wave — sin(x) — to represent an idealization of a day, but is probably wholly inaccurate of a real day. 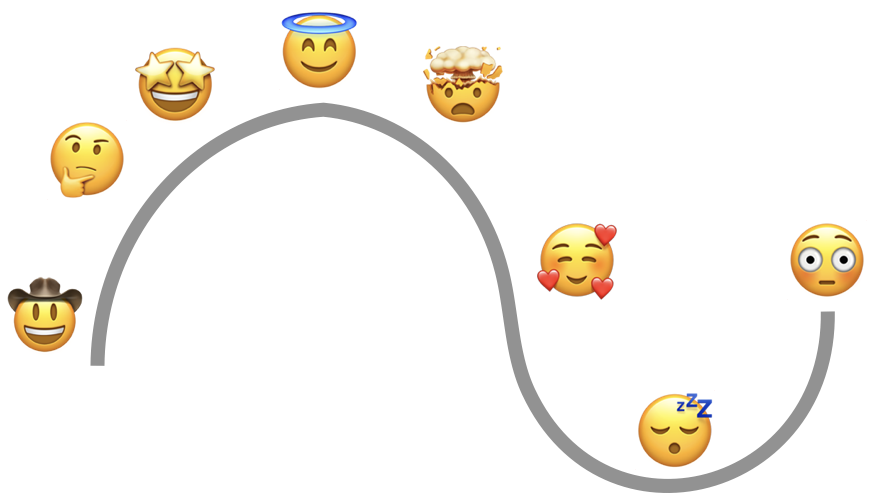 In this platonic reference wave, there is a ramp up to max productive output reaching peek flow state 😇 (theta brain waves) followed by a steady decline until we eat dinner and 😴 sleep in the trough (delta brain waves).

In reality, your day-to-day wave may have several peaks of productive output and a dip in work productivity for a nap or meditation.

The key to designing your ideal day-to-day wave is understanding the rhythm of your brain waves.

You can hack your brain waves using an app like Brain.fm which uses binaural beats + headphones to induce a desired brain state. The Brain.fm app comes highly recommended from the @acidphreak the founder of Supermassive.

Perhaps your day-to-day cadence is similar to the wave of a beating heart. 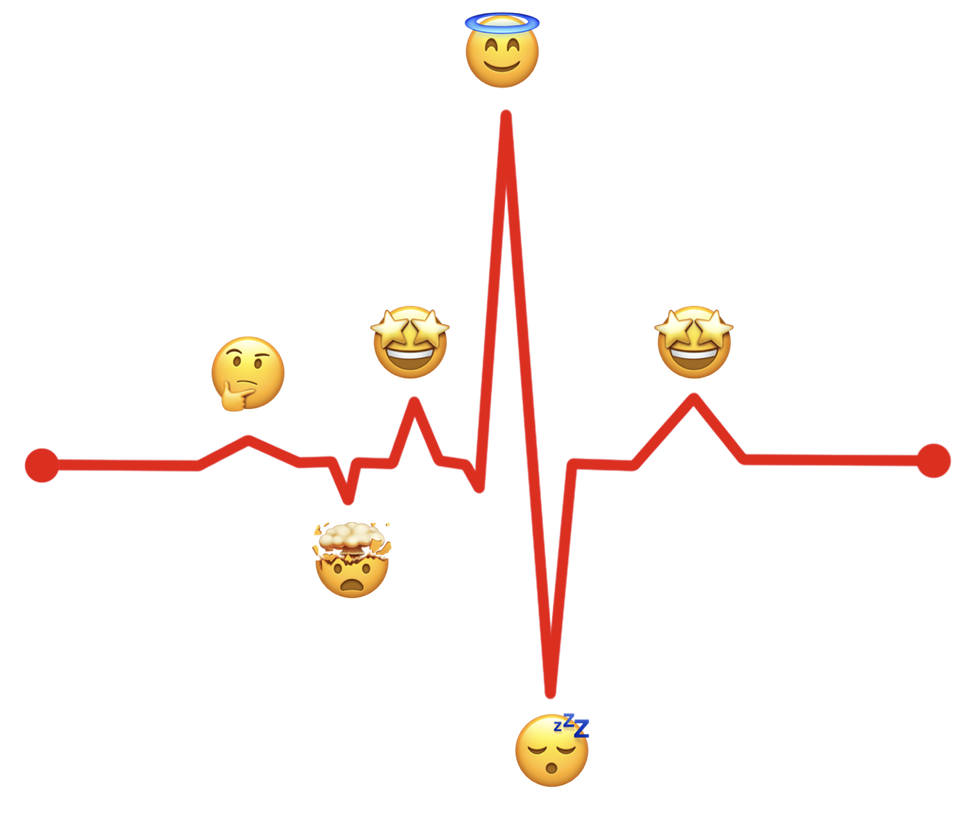 The key is to have awareness of your natural daily rhythm so you can allocate the slots of your day accordingly. I try to organize my day so that I have 3 opportunities to enter an individual flow state. You might optimize your peek flow state in super early morning or in wee hours of the night.

I’ll be doing a full break down of my day-to-day cadence in How to be a Cognitive Athlete.

Here’s what a week-to-week standing cadence wave looks like over time.

These group flow triggers were copied from Steven Kotler’s FAQ on Flow which were identified by psychologist Keith Sawyer.

This part of the cycle is about making sure your team is pointing in the right direction for the week.

In this example, it’s Monday. This is a great day for meetings (agile sprint planning, cross-functional syncing, roadmapping, backlog grooming, 1:1s, etc) and clearing any blockages that would prevent group flow over the week. Monday is also a great day to breathe in the operational metrics and review KPIs.

It’s demoralizing to sprint up a hill and then realize upon reaching the peak that it was a sisyphean effort.

Alignment is all about establishing some of the perquisite group flow triggers like shared goals, close listening, familiarity, risk, etc. so that the team can enter group flow during the progress phase of the week-to-week cadence wave.

Over the duration of the week there should be some progression to some maximum throughput — the peak of group flow.

In this example, that’s Tuesday-Thursday. This means removing all distractions and limiting meetings to focus only on the matters at hand in the present moment. Perhaps even eliminating scheduled meetings altogether on these days.

I recommend reading the Progress Principle to go deeper into progress phase.

Once a progress sprint completes, it’s time to show off the progress made.

Usually the best way to show progress is via a demo. On teams of past, we’ve held a “Show & Tell” every Friday to communicate progress. No matter how big or small, rudimentary or polished.

Friday is also a great day to have team lunch with unstructured discussion time to reflect on progress made during the week.

After an unstructured discussion over a meal, a more structured reflection process can be had in the afternoon in the form of an agile retrospective.

The insights gained from a weekly reflection practice are a key feedback loop for an antifragile execution system.

The trough of the week-to-week cadence wave period is dedicated to rest.

After a full week of making progress in flow, you’ll need to shutdown a bit to refresh. This means resisting the urge to work over the weekend.

My personal hack is to stop drinking caffeine over the weekend. It’s hard for me to get motivated without the aid of a stimulating cup of coffee. As an added bonus, I really look forward to Mondays as I’ll get fired up again with some coffee in the veins.

If your goal is to optimize dream team performance, then one must be careful to not waste all this critical recovery time being hungover.

I’d rather be a monk for most of the year and then throw something like Burning Man into the mix to disturb the cadence waves a bit.

All of the progress made week-to-week should be working towards a bigger objective that’s scoped within a quarter. As a quarter ends, it’s critical that work also ramp down so that a strategy feedback loop can occur.

A strategy feedback loop can take the form of a hackweek or an extended leadership offsite in nature.

One of my personal favorites for a strategy feedback loop technique is a silent hike. If you’re around San Francisco, you easily get some quick isolation by taking your team to Angel Island or Lands End. 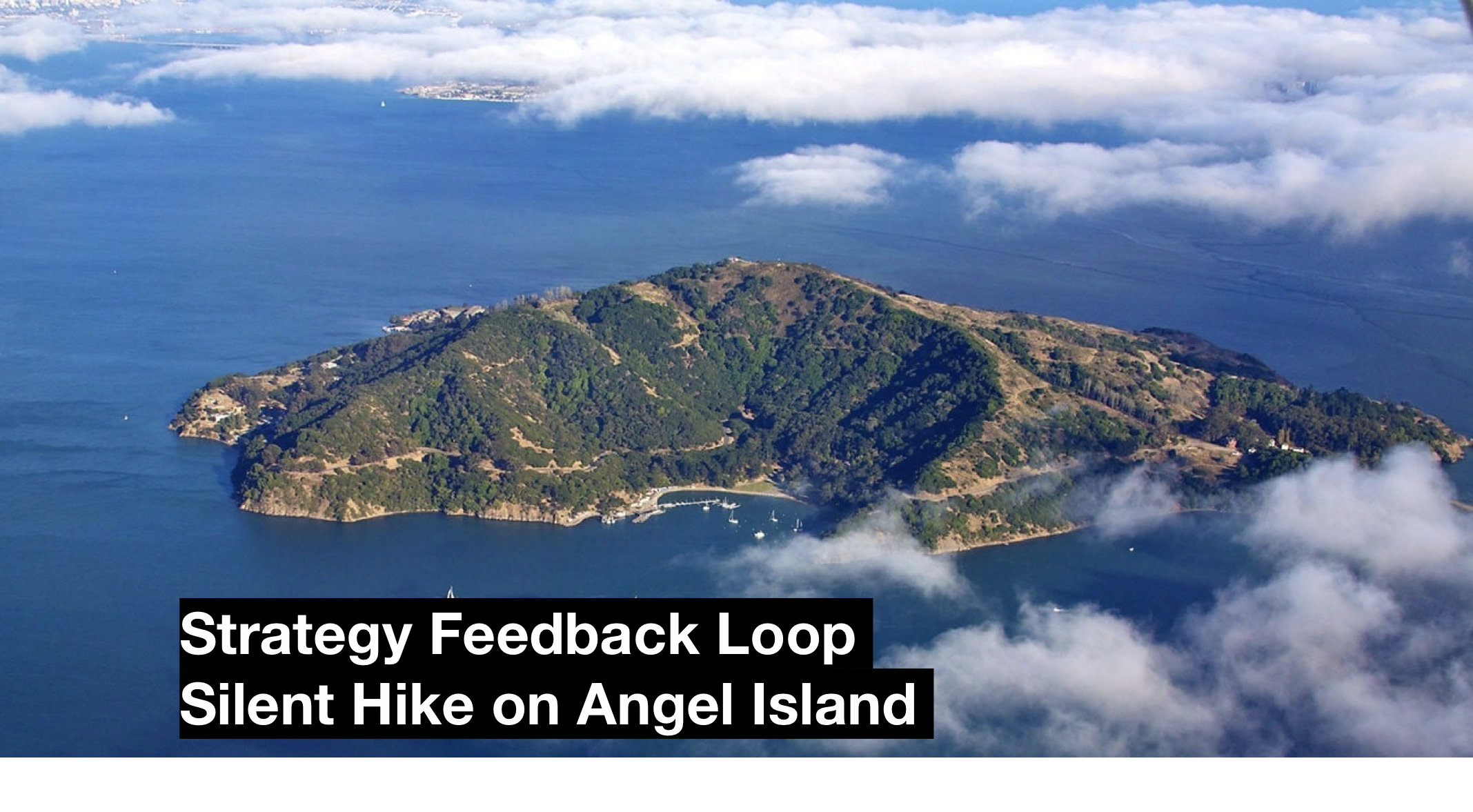 Before the hike, ground the team in the Why by recalling your team’s higher purpose and vision.

It’s likely the case that everyone has been way too engrossed in the What and How. Checkout this TED talk, Start With Why, from Simon Sinek for more details on this.

You can draw out Simon Sinek’s Golden Circles of Why, What, and How in the dirt. 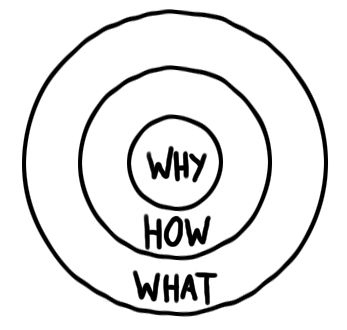 With everyone centered in the innermost circle of Why, it’ll be easier to have new perspectives on the How and What circles during the hike.

Before embarking, agree to practice a modified form of vipassana (i.e. insight meditation) and a noble silence until the summit is reached.

The silence is key to unwinding the team’s old patterns of thought as they ascend Angel Island. Through modified vipassana, individual awareness can be gently brought back to the Why as it drifts.

Once the summit is reached, huddle together to capture any interesting reflections or realizations that bubbled up.

Use these new insights to reset and recalibrate your strategy (the How) for the next quarter. The Why flows into the How (top-down strategy) and then into the What (bottom-up tactics) from decentralized leadership.

Some deeper level of reset is needed before transitioning between one full orbit around the sun to the next.

The obvious is the winter break and new year. What are the deeper set of practices your dream team can do together to clean out the cruft and make resolutions for?

On an individual level, I need a prolonged multi-day silent meditation retreat to prepare for upcoming year’s challenges and opportunities.

All of these waves superimpose to form the rhythm and heartbeat of your team.

If you recall wave interference from physics, it describes how waves constructively and destructively interfere with each other.

All of the cadence waves from individual team members should constructively superimpose to create a quality of resonance. Your dream team should have its own natural rhythm and resonance for execution .

Synchronization, harmonization, vibrations, or simply resonance in its most general sense seems to have an integral relationship with consciousness itself. One of the possible “neural correlates of consciousness” in mammalian brains is a combination of gamma, beta and theta synchrony. — Tam Hunt, Joathan Schooler.

Just like a biological heart, your team’s rhythm can be either normal, slow, fast, or irregular (arrhythmia). 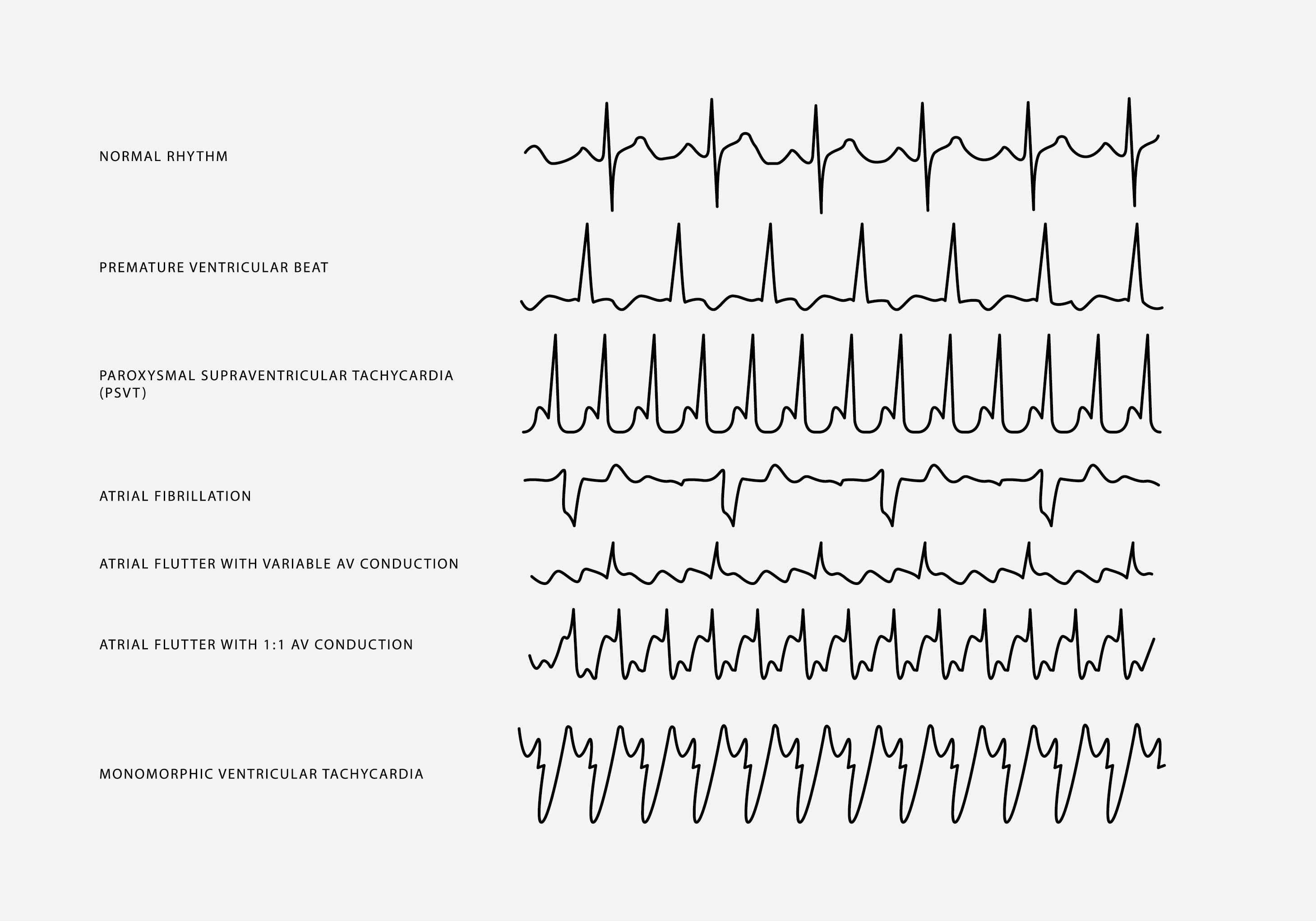 A dysfunctional team will not be executing in accordance to its normal rhythm; it is in some state of arrhythmia. By analyzing a team’s cadence waveform (similar to an EKG for the heart), you can make an attempt at diagnosing an execution problem.

I like to think of a healthy cadence rhythm as a pranayama breath. In pranayama — a yogic breathing technique — the pattern of a wave period is broken into phases for: Inhale, Hold, Exhale, Sustain.

Each of these phases is allocated according to a ratio. For example, a ratio of 1:3:2:1 with a timing of 4 seconds would yield:

A healthy weekly cadence (as described earlier) for my dream team is 1:3:1:2.

From here we could rift on other possibilities. For example, dedicating more time for rest would be 1:2:1:3.

It’s interesting to ponder what future team collaboration will look and feel like when neuralink allows us to connect (full duplex) our brain waves together. This will take group flow between humans and AIs to an entirely to new paradigm.

A critical mass of neuralink networked brains in group flow could achieve resonance to unlock a super consciousness. 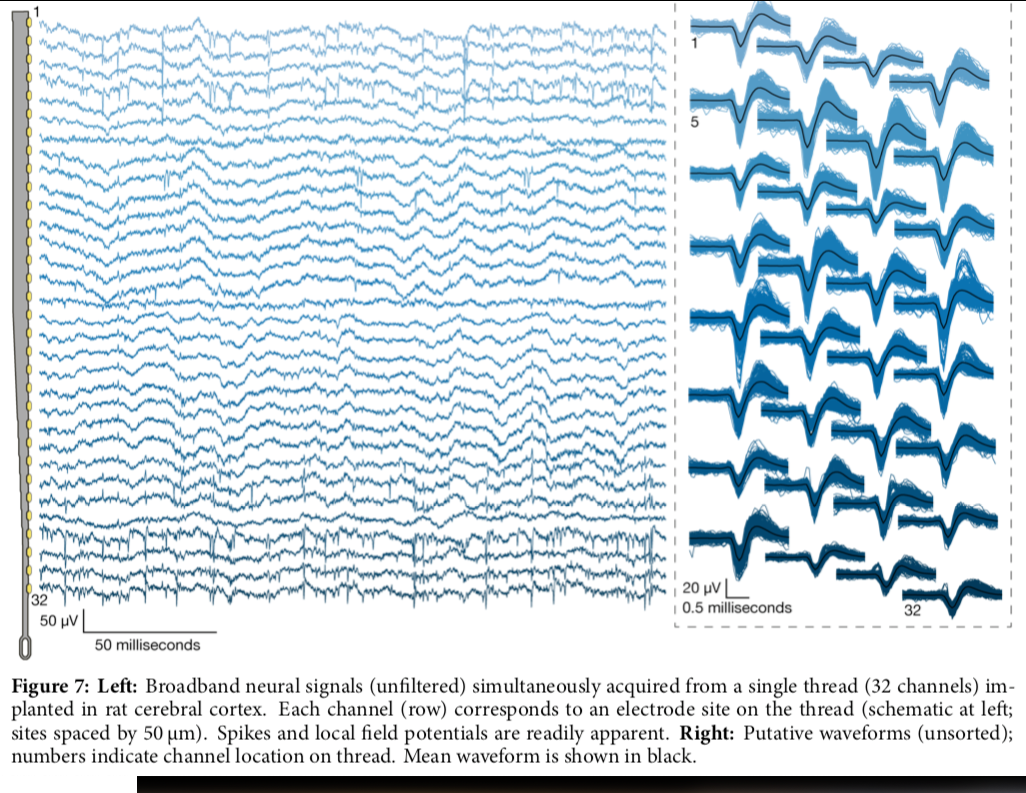 Progress Porcelain. Showing progress for the sake of communicating progress to higher-ups. Roadblocks are to be expected. Sometimes progress is halted due to unforeseen circumstances. Shit happens. It’s ok, that’s what reflection is for.

No Hackweeks or Retreats It’s tempting to skip a hackweek or retreat in favor of optimizing for the raw iterations. Skipping these however removes a critical feedback loop to recalibrate strategy and makes your system more fragile.

NEXT> We’ll explore a System for Leveling Up